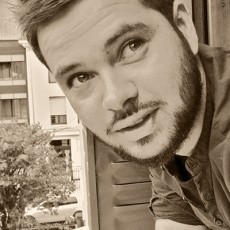 Yann Dalon, born in april 22th 1986, is a french artist based in Paris. He graduated from the universities of art and design Estienne and Olivier de Serres.

He said he always drew and paint with the desire to transcribe the movement, with the ambition of "moving a fixed picture". He wants to retranscribe a maximum of dynamism by the rhythm of strokes and the vibrance of the colors.

Among his inspirations, we can find famous painters like Goya, Le Caravage, Rembrand, Yves Klein, but also Surrealism and Hip-Hop movements. Clients from all around the world appreciate his art : Jim Beam, Bleacher Report, ESPN, ADIDAS, NBA, Disney, Blizzard, Adobe and orhers.

He had the opportunity to participate in various events like the Sport Managers ceremony in Paris, the Hockey World Cup opening on the Eiffel Tower, or the World Expo 2017 in Asthana where he represented his country with his painting of Marianne which adorn the French Pavilion.

His paintings style is a mix between traditional painting (watercolor - acrylic - ink - pen - ...) and digital painting (Photoshop and graphic tablet tools). The result is a file in very high definition ; so illustrations can be print in every size, with no limits.

To be determined Shipping
0,00 € Total

Product successfully added to your shopping cart
Quantity
Total
There are 0 items in your cart. There is 1 item in your cart.
Total products
Total shipping  To be determined
Total
Continue shopping Proceed to checkout

By pursuing your browsing on this website, you accept the use of the Cookies which guarantee its smooth running
Our artists ">