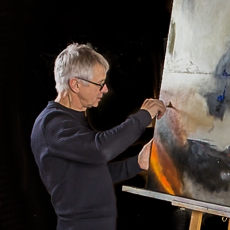 He was born in Le Havre and lives near Nantes, in France. He grows up in a family for whom the Art is intended only for an elite, and would not lead him towards a serious future. He was moreover no way in the family conversations, and the projects of orientation there of the future artist.

Having voluntarily turned over the page of an IT career, he heads for the Art. He dedicates several years in search of "his writing ". He reaches there in 2002.

Talk otherwise than with words, it is the objective that Dominique Prévots wants to achieve, since he penetrated into the universe of the abstraction. A not always easy approach in front of inevitable questioning of the looking. Dominique Prévots does not try to paint to please, he paints to have a dialogue.

A dialogue at a crossroads between the unreal and the representational artist, between the informal and the suggestive. It is the thought which pulls its movement on the canvas. This thought, presents as soon as he confronts with the white canvas; thought which does not leave him any more until the completion of the work.

According to the construction of the work, Dominique Prévots speech, the brush in action, sweeping the painting of ceaseless movements, often soft, affectionate, to wrap the creation of an atmosphere, an ambience. When he seizes the knife aplat, it is to stress the precise point of the thought that guides him. When he handles the cutting side, it is to mark a stop point, an interrogation.

The plastic work follows this verbal progress, this chain of the reasoning. The artist often questions himself instinctively, wonders about the relevance of his words, about their coherence.

In the last brushstroke, in the last incision of the knife, the reflection stops, the artist " step down ", he entrusts the work to the looking, it is to him that returns from now on the leisure to deconstruct the thought of the artist if he wishes.

To be determined Shipping
0,00 € Total

Product successfully added to your shopping cart
Quantity
Total
There are 0 items in your cart. There is 1 item in your cart.
Total products
Total shipping  To be determined
Total
Continue shopping Proceed to checkout

By pursuing your browsing on this website, you accept the use of the Cookies which guarantee its smooth running
Our artists ">